India, just like the world, is no exception to the current pandemic that has impacted society and its economy in an incredibly challenging manner. What started out as a virus of the East soon became a disaster for the entire world in just a few weeks. Today the world is coupled with another disaster since the devastating Spanish flu of 1918. While the world has seen other epidemics like HIV, Ebola, and others since the last forty years, this unique virus has impacted us in a way never expected before – a virus that spreads like fire and so far no treatment in sight.

One of the biggest challenges that are visible today in our country is the lower level incomes group who survive on daily wages, or low monthly incomes that come through maids, cleaners, drivers, etc. Besides the daily wage labourers who have families in villages, such a group of people have migrated with their families into larger cities for better sustainability options for themselves and their families.

Unfortunately, the condition of survival today has been difficult. Unless they are accepted back to work in the disorganized sector, their challenges will not end as soon as the lockdown is over. The middle and upper class of society is now deeply worried of bringing them back into their homes and environments due to a fear of them being carriers of the virus. On the one hand, people dearly want their household staff to manage their homes; on the other hand, there is a fear of being exposed to the infection. Many such people have been asked not to come to work for a few months already.

Shishu Sangopan Griha is a foundation that works in Delhi focussing on sustainable and constructive care for a single parent-led families or children living with kin families surviving in extremely challenging conditions. Delhi has thousands of children living with single parents or kin families who are the most affected in such circumstances – already bereft of a core family member due to death or desertion, and such caregivers have no option but to turn to the government for support. In normal times, these families were already families in crisis; COVID 19 has only made it worse and challenging.

Talking to the Executive Director of Shishu Sangopan Griha, Mr. Himadri De, he says, “Often the biggest challenge isn’t the actual problem as problems continue to exist in life. The challenge is enlarged when empathy goes missing, and one is left to fend for oneself at the mercy of people, often living below survival levels, extremely exposed to various forms of neglect every day. COVID has only made it worse for such children and families as they have lost whatever limited options they had for survival.”

The people of Delhi have responded in different ways to the needs of their people, which is positive – however, is that sufficient for a huge population of millions in need; and for such families who are quite fragile and unable to compete with healthier families to receive humanitarian aid.

According to Himadri De, one of the primary misconceptions that remain ingrained in our society is to give donations in kind for the poor people – a form that has survived through generations inspired by various social and religious beliefs and remains highly prevalent. The concept of giving has not changed in the 21st century. This is mainly influenced by our own satisfaction of providing a concrete product that can alleviate misery. There is both a sense of fulfilment of the ‘privileged’ giving to the poor, and a sense of mistrust of the poor people and their ability to make the right decisions for using money.

COVID 19 has majorly seen just that – the giving in-kind which has remained very limiting to the need of many. Through April 2020, Shishu Sangopan Griha has received urgent calls for milk for babies and children, for medicines for the elderly and chronically ill, for toiletries for families, and other such core needs. While food remains crucial for survival, it is not the only component of survival.

Himadri De states, “While rations may be handed out to the needy people, what donors forget is that cooking gas cylinders don’t last forever – you can’t cook if you don’t have fuel! Rationality should make us realize that every individual must have a sense of self-respect to buy what is needed for themselves rather than to depend on hand outs, and most people should be assumed to be rational enough to make the right choices of what is crucial for their family’s survival.”

Shishu Sangopan Griha has worked to support close to 2000 people through the month of April 2020. Some caring people like Sudhir Arya CEO of American Counsel for Education, Sanyogita Kapoor, Anjali Browne, Family Rizatto, and others made an investment into the lives of families at this time of real need through financial resources because they realized food alone wasn’t the answer to the problems that exist.

Himadri De concludes, “While we enter lockdown 3, the question is not about when the lockdown will end, but about when these families will be able to get back to work to provide basic needs for their children and themselves. The actual ground needs are the last mile needs – the micro-environment that must be empathized with thorough practical solutions, because it is we together along with our micro-environment of such challenged families, that make up the larger macro world of our country.

I am really proud of my small but highly effective team of motivated young ladies who joined me by risking their own health to ensure they reached out to the people as a strong, enthusiastic team – Momita Roy Choudhury, Ravina Bhalla, Neha Sharma, and Akhrole Mathew.” 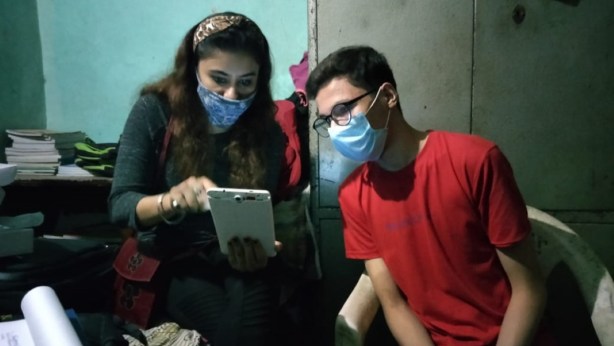 Tablets for the children in KARE

While Covid 19 has been a major concern for all...